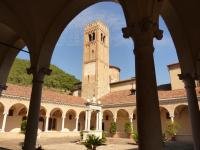 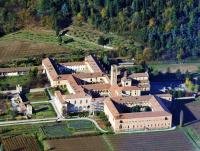 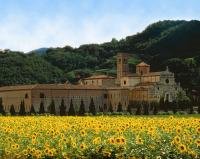 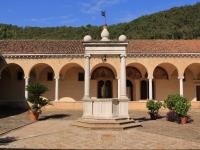 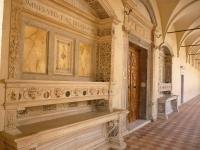 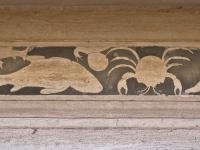 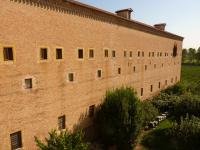 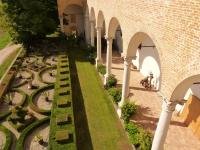 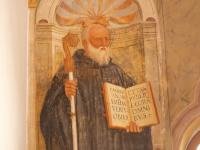 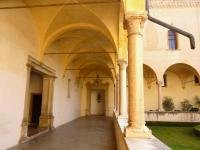 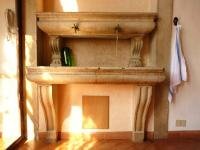 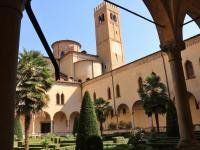 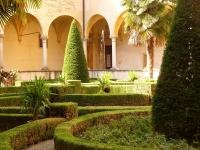 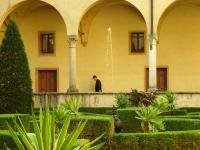 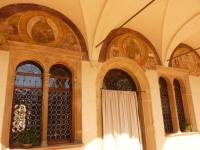 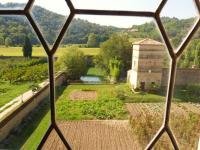 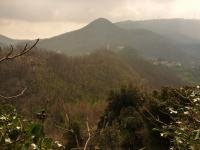 ❝Saint Benedict's maxim Ora et Labora finds its most complete expression in this abbey complex which consists of three splendid cloisters, abbey church, chapter house, monumental dining hall and library. The architectonic beauty is reflected in the perfectly ordered surrounding countryside, the result of centuries of reclamation and water management by the monks, who strove to turn the watery zone into fertile land. ❞

At the foot of the Euganean Hills, amid pleasant slopes and an ordered countryside, we come upon an oasis of spirituality. One of the most celebrated in Veneto, it is a site where architectural beauty and consolidated historical memory meet. The Praglia Abbey complex dominates the green rural land to the west of Padua, not far from Teolo and Abano Terme. Founded by Benedictine monks shortly after the year 1000, it became an important religious settlement, connected to the first reclamation works of the swampy lands at the foot of the Euganean Hills. Periodically subject to stagnation of water and swamping and therefore not healthy and productive, the area was chosen by the Benedictine monks to constructively apply their avant-garde knowledge of water control.
The current architectural structure is a combination of late Gothic and Renaissance. It is the result of radical reconstruction carried out between the fifteenth and sixteenth centuries. The bell tower is the only surviving trace of the foregoing medieval structure. A most interesting visit (only by reservation) is to the cloisters: the double cloister on two identical levels; the hanging cloister characterized by an ingenuous system of rainwater collection on the upper floors; the botanical cloister, historically used for the cultivation of medicinal plants (today it hosts an Italian garden); and lastly the rustic cloister, used in the agricultural activities of the adjacent fields. The monastery, which today has premises where interested guests can stay and experience a place of spiritual retreat, preserves many elements of historical and artistic interest, such as the Abbey Church, the Ancient Library, the Monumental Dining Hall and the Chapter House. A must see the two wall fountains by the hanging cloister, decorated with fish and floral motifs. There is also a small shop on the ground where you can browse the vast assortment of products made by the monks, including wine, honey, creams, herbal remedies and infusions.

By train: the Abbey can be reached from Terme Euganee-Abano-Montegrotto stations (served also by long-distance trains) or, alternatively, from Abano Terme station, the former 9 km, the latter 7 km. from the site.
By car: Motorway A13 (Bologna-Padova) exit at “Terme Euganee” and proceed towars Abano Terme; from the spa resort continue along the SP60 road until you reach Praglia. Alternatively, exit the Motorway A4 (Torino-Trieste) at “Padova Ovest”, proceed towards Abano Terme along the SR47 road, join the SR47 road and then the SP89 towards Praglia. Large parking area for visitors, free of charge, opposite the Abbey.

Opening times for visitors:
Abbazia di Praglia
Where to eat: we suggest the “Osteria Pizzeria ai Colli”, which serves meat and fish dishes, along with pizza (Via IV Novembre 2, Teolo; tel. 049 9903979) and the “Ristorante Pizzeria La Cascina” (Via Euganea 27, Teolo; tel. 049 9900588).
Where to stay: we recommend the “Locanda Piccolo Colle Antico”, within walking distance of the Abbey, which provides a wine bar to sample local and national specialities.