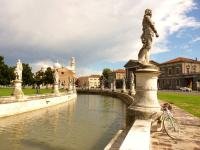 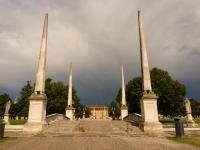 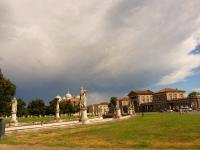 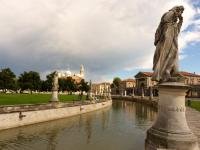 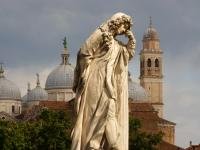 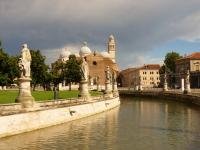 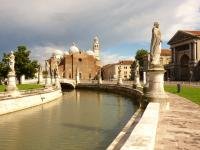 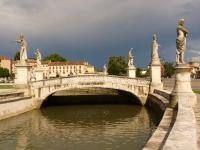 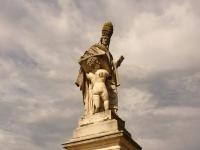 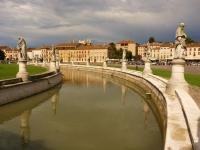 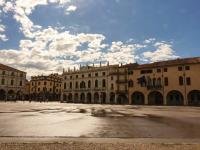 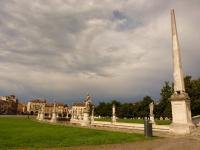 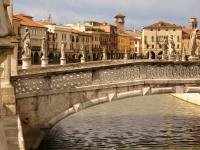 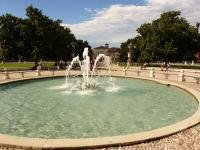 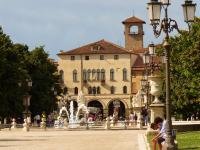 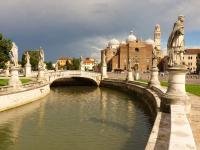 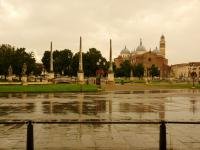 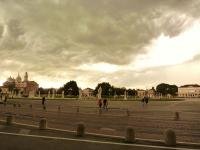 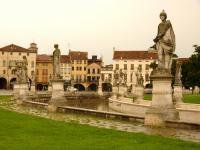 ❝One of Europe's largest squares, Prato della Valle in Padua, is the result of avant-garde hydraulic knowledge combined with forward thinking ideas about an urban water-scape. On this swampy site, which today is a marvelous union of water and architecture, there are 78 statues dedicated to illustrious figures of the eighteenth century, all reflected in the gentle backdrop of the canal waters. ❞

The square of Prato della Valle, symbol of Padua and an incredible work of architectonics that extends for almost 90,000 square metres, is one of the largest in Europe. It is the outcome of efficient hydraulic engineering combined with clever urban planning that sought to reclaim the persistently swampy land. The reclamation of the area, carried out during the eighteenth century, meant that a historically watery zone became definitively englobed into the fabric of the city. The determining reclamation work had the stagnant waters conducted to an external hydraulic circuit, followed by the creation of an elegant garden. The creation of a wide central island, called Memmia Island (after the extraordinary Venetian superintendent who was behind the site’s creation in 1775), was made possible thanks to an artificial canal that was elliptical, rather than straight. The wide space that opens up between the historical buildings and the marvellous monuments of Padua, an ideal stage for leisure and entertainment, is unique due to the presence of water which circumscribes the green central square and makes everything feel much bigger. Although Prato della Valle has always been a central place in Padua with its markets, fairs, and games shows, it was thanks to Andrea Memmo that it became a world-renowned site. Making the site even more unique is the army of 78 statues, representing illustrious men of letters, philosophers and scientists connected to Padua, as well as the doges and Popes of the period. They are positioned along the ellipse created by the water drainage canal. Elegant and graceful, the sculptures, to which the young Antonio Canova also contributed, reflect in the changing liquid surface where the sky too is mirrored.

By train: from Padua station proceed into the town centre along Corso del Popolo and then follow the signs to Prato della Valle.
By car: exit the motorway A4 (Torino-Trieste) at “Padova Est”, continue towards the centre of Padua and once at Stanga area proceed along Via Ludovico Ariosto and Via Gattamelata; then drive through Via Manzoni and turn into via Cavazzana. Travelling from the South along the A13 Motorway (Bologna-Padova) join the link road towards Padua town centre, exit at “Padova Sud” and continue towards the town centre along Via Battaglia, Via Adriatica and Via Cavallotti. Car parks available near the Square.